Seven members were present. Check-in and opening prayer were held.

Minutes: The minutes from July and August were received.

Treasurer’s Report: We had the ordinary expenses and income. The current balance is $235.83, which is less than the $300 monthly stipend. There are a number of changes happening.  The account at Wells Fargo has been closed and the funds moved to the Star Credit Union. Brian would like to transition out of his role as treasurer. He has served in that capacity for ten years. He is willing to remain on the board. He is willing to be flexible so there can be a smooth transition. Bohdan expressed appreciation for his service and the board expressed thanks for his faithful work, including writing the annual appeal letters. The Board needs to discuss maintaining our general account and ways to manage it. There has been discussion of taking an offering for the FRLC general fund at the closing of the Conference. Brian will participate in the FRLC Annual Meeting in person or by phone. The meeting is scheduled for 1:00 pm Sunday, September 30, following the Conference. There will be opportunity to elect new treasurer at that point and have a smooth handoff.

Coordinator’s Report: The FRLC is doing what it normally does. We have more members attending the conference than we’ve had at a retreat in a long time. About twenty FRLC members are registered. Ed noted that we have been low on funds before and that people have responded when we share the need. We haven’t asked for funds for the Fellowship in a while as the focus has been on undergirding the Conference. The Conference is raising our profile in the church relative to where we’ve been before.

The Conference is snow-balling. It’s a lot of work and we have a lot of great people stepping up to it. Others are taking care of the details Ed would never have thought of. God is watching over us! Our registrations are nearly full–we have capacity for 200. There are only 5 or 6 spots left. The rooms reserved for the Conference are all taken. We have over 135 room nights booked and have more than fulfilled our hotel contract, which obligated us to pay for unsold rooms if we did not meet the minimum. The speakers have all been contacted and are all confirmed. It looks like we will break even and maybe even come out a little bit ahead financially. The FRLC retreat will begin Thursday, tentative plans for dinner at 5:30 pm. Roger and Melanie have developed a draft schedule for the retreat which will be sent out be email once it is finalized. They had some questions, which Ed will respond to soon.

There will be a work party at Transfiguration all day Thursday before the Conference preparing materials for the participants.  All are welcome—Ed offered to provide rides (or arrange for them) from the airport as needed. There is an online app called “Sched” for conference information, which can be downloaded now. An email went out to people who are registered for the Conference but it is easy to miss in the inbox. Ed is still working on it and will send it out a few more times before the Conference. It would be helpful for us to try it out and give Ed feedback.

He is developing a list of people who will be there to volunteer at the Conference. He will assign tasks to people who are attending, and then answer questions when we arrive. People can trade tasks at that time if necessary.

Prayers are requested for Ed in these final weeks of preparing for the Conference.

If anyone wants to go off the board, it would be helpful to know between now and the Conference so we could be prepared for elections at the Annual Meeting.

Tom closed the meeting with prayer.

We will discuss our next meeting date at the Annual Meeting. It will likely be in November.

ELCA and LCMS clergy share personal stories about alcoholism, addiction, and codependency, and how they discovered healing through a Twelve Step program of recovery as well as FRLC. Stories of Experience, Strength, & Hope is available from AuthorHouse. 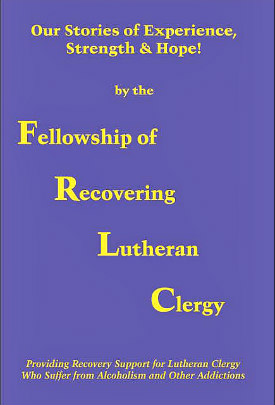